In the majority of my classes I teach some qigong as a warm-up.
I do this for a number of reasons:-

When used as a warm-up, you can’t really go much beyond that.

Qigong isn’t as popular as tai chi at the moment, but it’s starting to go that way.  Tai chi has had plenty of press over the last couple of years to the extent that I have found that more and more doctors and specialists are recommending that their patients take it up.  This is no longer only among the older age groups, it’s spreading to younger age groups, and doctors now appear to be recommending not only tai chi but also qigong.

Why do qigong?
You can get to the same place by doing tai chi alone, but it just takes longer.
You could say that there is qigong in tai chi, but there isn’t necessarily tai chi in qigong. 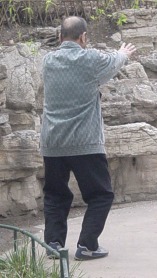 Qigong works on the core of what you are trying to do in tai chi.  Some people would say that qigong is easier than tai chi, and in some ways that’s true – often there is less movement involved (although that does depend on the type of qigong you’re doing).

Because there can be less outwardly-obvious movement, qigong works more consciously and immediately on the use of the core (e.g. the lower ‘dantian’, but this could be any of the ‘dantians’), and the spine.
In the case of the lower dantian, movement is initiated here, and all outward movement (the extremities… arms and legs) are a manifestation of that.

This is true for tai chi also, but when people do tai chi, they become involved with where the various limbs are going… ‘left hand up, right hand down’, ‘right foot is turning inwards by 45 degrees, whilst the left elbow is sinking’, or ‘the weight shifting from right foot to left foot and back to right foot…’, and so on.
This is all fine – after all, you’re trying to learn the shape of a set of movements.  Unfortunately and inevitably, it’s very ‘external’, the outside movements are distracting – catching the eye more than the internal movements which are far less obvious, but ultimately far more important.

So in Qigong, we predominantly focus on what’s going on inside, right from the start, and this is the real reason that qigong is taught in a tai chi class… the internal movement should educate the external movement.

Why qigong without tai chi?
When you do qigong as more than just a warm-up, you can go into it in a little more depth. Some of the reasons for learning qigong on its own are:-

Energy
I mentioned the words ‘increase energy’ above.  I think that this applies to all types of qigong, but particularly to Zhan Zhuang Qigong – static qigong, sometimes known as Standing Pole, or Standing like a Tree.

This is perhaps the most demanding type of qigong that I’ve come across, not only physically but mentally.  It requires that you position the body with bent knees and raised arms (not necessarily very high) and simply hold that posture (see the photos above).  Whilst in this posture (and many other similar postures), you relax the body.
When relaxation occurs, it is as though ‘pockets’ of energy, previously trapped, are released, as though the pipelines of the energy plumbing system suddenly become unblocked.
When this happens, it’s as though the energy release is self-perpetuating; it doesn’t simply stop once the system has become balanced, it continues to increase.

Whilst practising this exercise, the mind comes up with the most astonishing number of reasons to stop doing the exercise – too many other things to do, a slight itch that needs scratching, perhaps going for a walk might be better exercise, a remarkable desire to do some cleaning…. anything!
The exercise is starting to sort out the nervous system; it feels very uncomfortable, and the mind will try anything to get out of it.
Click here for further information about ‘Standing Qigong’ (Zhan Zhuang), and other qigong exercises for the organs.

And finally…
It also has an effect on one’s longevity… but finding out about that can be a bit of a wait!