Feeling that sinking feeling.
If you’ve ever been at the seaside and put your foot on a raised rock, and then attempted to push yourself up using only the leg on the rock, you’ve had the sinking feeling.  Your leg briefly works very hard, and it feels as though your torso is compressing your leg and foot into the rock.

step on the stairs; but you actually do the same thing even when walking on the level.  When you put that foot forwards and move the weight on to it, for a brief moment the torso sinks into that solo leg before pushing itself upwards in order to bring the other leg through for the next step.

So what’s going on?
The Chinese wrould say that you are sinking your qi during that moment, and for some people, it’s not a very pleasant sensation.  I’ve noticed that, by and large, people don’t like the feeling of their legs working correctly.

One of the reasons tai chi teachers spend so much time correcting people’s postures is that, when we need to do something with our legs that requires effort, instead of just using our legs, we ‘borrow’ other muscles, (‘recruit’ in Alexander Technique terms), in the hips, back, and even the neck that aren’t necessary for the job.

Why?  Because it’s easier on the legs; it spreads the load.  It’s fine occasionally, but the trouble is that it rarely is occasionally … it becomes a habit.

This becomes apparent when, for example, I correct someone’s posture in Stork/White Crane Spreads its Wings, (where all the weight is taken on one bent leg).  People usually find it very difficult, even unpleasant; they don’t like the feeling of only the necessary muscles working correctly.

Passing the 40 mark.
These problems gradually become more extreme as we age.

There may be very good reasons for this, such as arthritis, worn joints in knees, hips, and ankles, debris in the joints, joints that have changed shape through misuse over time, cartilage problems, etc., but leaving these mechanical reasons aside, most people as they age don’t trust their joints as much as they used to when they were younger, mainly because they haven’t strengthened those particular connections over time, and little by little have ended up sitting down more.

Or even younger.
Leg strength used not to be a problem for people in their 20s and 30s, but over the last 10 years I’ve noticed that it’s definitely edging into these age groups.
I’m guessing that it’s partly to do with our lifestyle, including both what we eat and how much, but also screens of all types (we don’t even have to walk to the phone nowadays, it’s often in our pocket), and that so many jobs are sedentary.

I’d rather use a coat hook.
Older people often appear to be trying to ‘hold themselves up’ off the ground.  Their qi, instead of sinking, seems to be held more and more in the upper body, as though they’re trying to take the weight off their legs.  In a sense that’s exactly what they’re trying to do, because if you don’t trust your hips or knees, you’re not sure if your knees are going to give way, you’re worried about exerting pressure on the wrong part of the knee, or you’re worried about your balance, then that’s exactly what you’d want to do.
It’s a vicious circle; the less you use your legs, the less you trust them, and therefore the less you use them, etc.

And the point is? 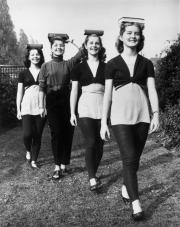 Well, obviously… You’re doing the right thing if you’re doing tai chi or qigong.
There’s plenty of research available about how they can benefit all the joints, and even doctors, who 10 years ago knew nothing about tai chi and qigong, are now recommending that joint sufferers, and people with balance problems (and heart/blood pressure problems) take them up.
Perhaps we should all be taking deportment classes!

James Drewe teaches Taijiquan and qigong in both London and in Kent.  Details of weekly classes can be found on the website, and there are classes for 2-person Taijiquan on one Saturday a month.