When going for a lesson with my tai chi teacher, it always intrigues me that, when she’s trying to explain a new concept to me, it almost feels as though I’m on a different planet. 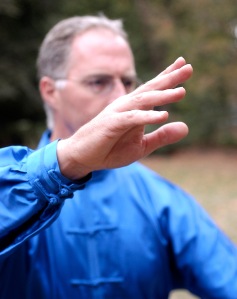 How do you get to grips with a concept that is totally alien to you?  You can only relate it to something that you already know; otherwise it’s like being spoken to in a foreign language, or trying to join in a team sport of which you have absolutely no idea of the rules.

I noticed this particularly when learning some Wu style tai chi recently; to date I have done a lot of Yang style, a fair amount of Sun style, some Chen, some Wudang, and many years ago, 5 years of Lee style… well, 34 years ago to be precise.

The example that springs to mind was when learning how to do Brush Knee & Side Step.
Brush Knee has certain characteristics in the various styles… (The final position is that you are pushing one hand directly ahead, the other hand is palm down by the side of the body, and the front foot is the opposite to the hand that is pushing; e.g. right hand pushing, therefore left foot forwards.
However, the way that the left hand (in this case the lower hand) operates in Wu style has a subtle difference compared to Yang that I couldn’t ‘get’ at first.

Both my teacher and I obviously found this very frustrating, and this was exaggerated because her spoken English is better than my Chinese (which is virtually non-existent), but not nearly as good as her Chinese….

This last sentence is my first point; you have to spend a while deciphering what the teacher means, especially as a Chinese person, if translating in his/her head directly into English, will produce a sentence that will have the concepts of the sentence in a different order to the way that an English person would express the same sentence.
But this is just structural.  My main point is that when we learn, we base our new understanding on the construct of the old; we can only see the view from where we are at the moment, not from the other side of the valley.  To get to the other side of the valley, we bring ourselves, i.e. our habits, our patterns, our perspective, and our understanding, so it’s impossible to get an entirely new view or perspective of the world.

The only time this happens is when there is a ‘leap of understanding’, a eureka moment.  It reminds me of the story of Magellan’s discovery of the Straits that I once heard in a lecture.
I have no idea how accurately I’ve remembered this story, but the gist is that when Magellan’s ships came in sight of the shores, the inhabitants of those shores were unable to see the ships; the ships were so far from any experience that the inhabitants had previously had, that their minds were unable to compute their possibility, and therefore they were ‘physically’ unable to see them.

Whether or not this story is true doesn’t really matter, it’s the concept that’s interesting, because in a very minor way, this is what is going on when you try to learn something new. When you are learning, and the lesson makes a jump (perhaps you missed a class), it’s much harder to ‘see’ … almost as though an evolutionary thread has been broken.